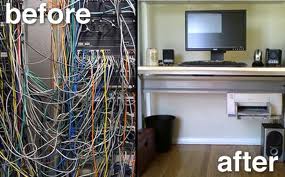 Here’s the first example of how simply using technology better helped these businesses do what they needed to more efficiently and effectively.

A peer to peer network based on a small router, connecting to a satellite internet connection, was extended with a second router. Computers connected to the second router were only able to print via computers connected to the first router when it was switched on first. Managing data and emails was inconsistent and disparate, and unacceptable given the legal issues involved in managing children’s care.

The peer to peer network was upgraded to a more secure and stable network based on Microsoft Small Business Server 2003. Because of the slow and intermittent satellite broadband connection, the POP3 connector into the Exchange Server was used to ensure emails were centralised allowing for secretary rights to be used. Data was also secured according to user roles and backed up with backups rotated offsite for resilience.

The centralised Windows Update Server and AntiVirus deployments ensured a consitent and stable environment for users to be able to login securely from each of the devices on the network. A hardware firewall between the internet connection and server, backed up with using Uninterruptable Power Supply ensured the internal network was well protected. Replacing individual printers with a centrally networked printer ensured everyone could print regardless of which PCs were switched on.